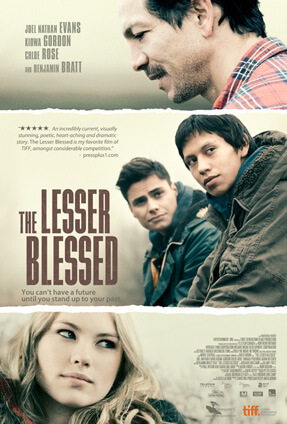 "The Lesser Blessed" takes a dark but somewhat conventional high school melodrama and sets it on an Indian reservation in Canada. It's a revealing portrait of lives on the edge of poverty (no casinos here, apparently) and the limiting, two-fisted world a sensitive soul world like Larry might never escape.

Director Anita Doron, who also wrote the script based on the novel by Richard Van Camp, has assembled a uniformly solid cast, starting with an impressive debut by Evans, whose brown eyes are both soulful and watchful. It's a performance that commands our attention and empathy.

This is a coming-of-age film, with a distinctly northern Canadian flavour, that will appeal to both moody adolescents and discerning adults.