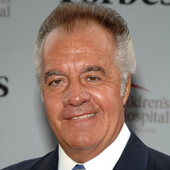 Genaro Anthony "Tony" Sirico, Jr. (born July 29, 1942) is an American actor, best known for his role as Paulie "Walnuts" Gualtieri in The Sopranos.

He also played policemen in the films Dead Presidents and Deconstructing Harry. Sirico's most acclaimed acting job was that of Paulie Gualtieri in David Chase's Emmy award winning drama, The Sopranos. Recently, he told the host of a Las Vegas radio show he would be playing the role of an ill-tempered high school football coach in an upcoming comedy for children called Sports Heaven. He is currently set to star in the upcoming drama Zarra's Law, written and produced by Joseph Scarpinito for Scarpe Diem Productions.

In late 2013, he voiced the character of Vinny Griffin, who was the family's pet dog in Family Guy (replacing Brian Griffin after his death; Brian would later be saved via time travel two episodes after Vinny's debut). Sirico also made a cameo in the episode "Stewie, Chris, & Brian's Excellent Adventure, where he threatens Stewie, who had insulted Italians, calling them "ridiculous people".