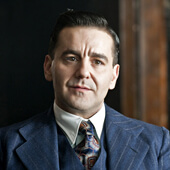 Max Casella (born Maximilian Deitch, June 6, 1967) is an American actor. He is known for his roles on the television series The Sopranos, Boardwalk Empire, Doogie Howser, M.D., Vinyl, Cro and the voice of Daxter in the Jak and Daxter video game series.

Casella was born in Washington, D.C., the son of David Deitch (a newspaper columnist) and Doris Casella (a social worker). His father is Jewish and his mother is of Italian descent. He grew up in Cambridge, Massachusetts, where he attended the same school as Traci Bingham and Matt Damon. He married Leona Robbins in 2002, and they have two daughters, Mia and Gioia. They live in New York City. He also has a brother, Lorenzo, who is four years older.

Casella played Vincent "Vinnie" Delpino in the television series Doogie Howser, M.D. from 1989 to 1993 with Neil Patrick Harris. In 1992, Casella played Racetrack Higgins in Newsies, which was based upon true events in the 1899 newsboys strike against Joseph Pulitzer and William Randolph Hearst. He appeared in WindRunner: A Spirited Journey, starring Margot Kidder and Russell Means as Jim Thorpe's ghost. In 1997, Casella played Timon in the original Broadway production of The Lion King; a performance for which he was awarded a Theatre World Award and received a Drama Desk Award nomination. From 2000 to 2001 he returned to Broadway as Marcellus Washburn in the revival of The Music Man. Casella portrayed Pvt. Dino Paparelli in Sgt. Bilko. He joined the cast of the HBO series The Sopranos during its third season, as Benny Fazio. Casella also starred in Ed Wood and Analyze This. In 2007, Casella plays Dick Howser in the ESPN mini-series The Bronx is Burning. He also voiced Tip in The Little Mermaid II: Return to the Sea, Zini in the CGI film Dinosaur and the titular character in ABC's Cro. In 2008, Casella played Mack Steiner in Leatherheads and Dennis, one of the main characters in Scaring the Fish. He also played Leo D'Alessio in season one of the HBO series Boardwalk Empire.