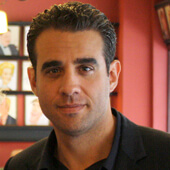 In both career and in real life, Bobby Cannavale tends to choose the unconventional way of doing things. In the beginning, his decisions may have cost the dark, swarthily good-looking actor some acting roles and/or good-paying money but, in the end, his strong work ethic and sense of self, despite a lack of formal training, allowed him to take a successful path off the crowded acting trail. From character goofball and cut-up, he has broken into the leading man ranks with his recent starring role as a reincarnated matchmaker in the TV series Cupid (2009).

Born Roberto M. Cannavale in Union City, New Jersey, to an Italian father, Sal, and Cuban mother, Isabel, he was involved in various activities at his Union City Catholic school, St. Michaels, while growing up. An altar boy, choir boy and lector, he also appeared in the church school's various musicals including his very first, "Guys and Dolls", in which he showed up as one of the gangsters, and "The Music Man", appearing as the lisping, scene-stealing tyke, "Winthrop".

Bobby's parents divorced when he was five years old and his mother moved the family to Puerto Rico for a couple of years. Eventually, they returned to the States and settled in Coconut Creek, Florida, where he attended high school. Restless and uncomfortable in any sort of regimented setting, he often got suspended for playing the class clown. Graduating in the late 1980s, and bitten by the acting bug, Bobby chose to return to the New York/New Jersey area in order to jump start an acting career. Working in bars to support himself, he again avoided the confines of an acting school and, instead, gained experience as a "reader" on occasion with the Naked Angels theatre company. During this time (1994), he met and married Jenny Lumet, the actress-daughter of director Sidney Lumet. They had son, Jake, the following year. The couple divorced in 2003.

Spotted by playwright Lanford Wilson while performing in an East Village production of Larry Kramer's "The Normal Heart", Bobby was invited to join Wilson's prestigious Circle Repertory Theatre. As a "reader" for the company, he eventually earned stage parts in "Chilean Holidays" (1996) and in Wilson's "Virgil Is Still the Frog Boy". He also went on to serve as understudy to Mark Linn-Baker in a 1998 production of "A Flea in Her Ear" and later replaced him. A noticeable role in the company's play, "The Most Fabulous Story Ever Told" by Paul Rudnick led to Bobby's being cast in the recurring role of a tugboat operator in the TV series Trinity (1998). Having only appeared in bit parts thus far in such movies as Night Falls on Manhattan (1996), directed by Lumet, and I'm Not Rappaport (1996), it was "Trinity" creator John Wells who caught Bobby's stage performance and handed him this career-making break on camera.

Bobby's "nice-guy" aura and blue-collar charm proved invaluable, if a bit restrictive. Once the "Trinity" series ended, Wells cast the 6'3" lug with the trademark caterpillar brows and crooked smile as lovelorn paramedic "Bobby Caffey" in his series Third Watch (1999). The character became quite popular but Bobby, again feeling restricted and wishing to broaden his horizon as an actor, asked to be released from the show -- but "in a big way". Creator Wells obliged and had the paramedic fatally shot in the chest and then experience a "beyond the grave" union with his character's deceased, ne'er-do-well dad.

Bobby next joined the cast of father-in-law Sidney Lumet's acclaimed TV courtroom drama Centre Street (2001), starring Alan Arkin, cast against type as a brazenly opportunistic prosecutor. He subsequently earned recurring roles on Ally McBeal (1997) (in 2002) and Six Feet Under (2001) (in 2004). As for films, Bobby was featured in Gloria (1999), The Bone Collector (1999), Washington Heights (2002) and The Guru (2002) by the time he scored as the gregarious truck driver in the critically-hailed indie film The Station Agent (2003), which paired him intriguingly opposite the diminutive actor Peter Dinklage.

Unwilling to shirk away from more controversial roles such as his gay drug dealer who has the hots for a fellow prisoner in the acclaimed series Oz (1997) or his closeted dancing neophyte in the film comedy Shall We Dance (2004) starring Richard Gere, Bobby continued to elevate his status seesawing between film (Shortcut to Happiness (2003), Happy Endings (2005), Romance & Cigarettes (2005)) and TV assignments (the miniseries Kingpin (2003)). He earned big viewer points with his recurring portrayal of "Will Truman"'s dour cop/boyfriend on the hit sitcom Will & Grace (1998) in 2004 and won a "Guest Star" Emmy award in the process. Elsewhere, on stage, he merited attention in such productions as "Hurlyburly" and earned a Tony Award nomination for his 2007 Broadway debut in "Mauritius".