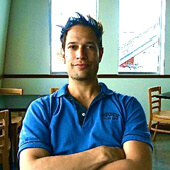 A graduate of Temple University and the UCLA Screenwriting Program, Anthony currently has two screenplays in development with Pathos Films, and has optioned two others.

He won the grand prize for screenwriting at the Philadelphia Film Festival in 2011. On four different occasions, he has been a quarterfinalist for the Nicholl Fellowship, a screenplay competition hosted by the Academy of Motion Picture Arts and Sciences. Anthony was also a semi-finalist, for comedy writing, at the Austin Film Festival in 2012.

Anthony's writing career began as a journalist, having written for The LA Times, Associated Press, and various national magazines. Anthony grew up in Philadelphia, and is a former amateur boxer. He moved out west to Los Angeles eight years ago, and currently works at Sony Studios.