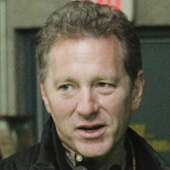 Ralph W. Hemecker is an American film and television director, writer and producer. He is well known for his work on the ABC fantasy series Once Upon a Time; and for The CW superhero drama The Flash.

In 2000, Hemecker founded Mythic Films, a full service feature film, TV and commercial production company. After directing Witchblade, Hemecker served as the showrunner, writer and producer for the subsequent television series. The series aired from 2000 to 2002.

Hemecker has amassed numerous credits in television, directing episodes of Renegade, Dead at 21, Millennium, Numb3rs, V, Blue Bloods, and Nikita; as well as directing a number of television films.

In 2000 he founded Mythic Films, a full service feature film, TV and commercial production company. Their first project was the television feature Witchblade, for which Hemecker served as the director. The project was based on a comic and a television spin-off was also commissioned. Hemecker served as the Executive Producer and show runner for the project. He co-wrote and directed the series pilot. The show lasted for two seasons from 2001 to 2002. He continued to write and direct frequently over its run.

After Witchblade he returned to episodic television when joined the crew of Numb3rs as an episodic director for the fourth season in fall 2007. He returned to direct a further two episodes for the fifth season and three episodes of the sixth season. He also directed an episode of Ghost Whisperer in the 2009 to 2010 season. In the 2010 to 2011 season he directed episodes for the series Blue Bloods, Vampire Diaries, V, and Nikita.

Since 2011, he has been directing episodes of the smash hit ABC TV show, Once Upon a Time, including the 2012, 2013, and 2014 season premieres which were #1 in the Nielsen ratings during their respective weeks.