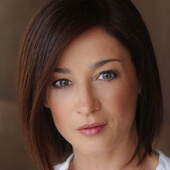 Moira Kelly (born March 6, 1968) is an American actress. She is best known for the role of Donna Hayward in Twin Peaks: Fire Walk With Me, replacing Lara Flynn Boyle in this prequel to the 1990 TV Series Twin Peaks. She is also known for portraying Kate Moseley in the 1992 film The Cutting Edge, as well as single mother Karen Roe on the teen drama One Tree Hill, Dorothy Day in Entertaining Angels: The Dorothy Day Story, White House media consultant Mandy Hampton in the first season of The West Wing, and the voice of Simba's love interest Nala in The Lion King and its sequel The Lion King II: Simba's Pride. She also played Hetty Kelly and Oona O'Neill in Chaplin (1992).

Kelly made her professional acting debut in the made-for-TV movie Love, Lies and Murder, playing as a teenage murderer. She went on to have small roles in the films The Boy Who Cried Bitch, Hi-Life, and Billy Bathgate before being cast as Donna Hayward in Twin Peaks: Fire Walk with Me. For that film, she went home and got permission from her priest because of an explicit sex scene. In the same year, she starred opposite D. B. Sweeney in the romantic comedy The Cutting Edge and played two roles opposite Robert Downey, Jr. in Chaplin. According to a TV Guide interview, before taking on her role in Daybreak, Kelly once again asked her priest for advice: "Being a Catholic, I wondered if it would be against my religion to play a girl who has premarital sex". The priest told her "it was okay, as long as my artistic intentions were true and I wasn't doing it for the notoriety or the money".

She has since appeared in the movies With Honors, Little Odessa, The Tie That Binds and Dangerous Beauty amongst others, and provided the adult voice of Nala in Disney's The Lion King, The Lion King II: Simba's Pride, and The Lion King 1½. In her independent film career, Kelly had the starring role of activist Dorothy Day in Entertaining Angels: The Dorothy Day Story and starred alongside Glenn Close in The Safety of Objects. She played Helen Keller in the made-for-TV movie Monday After the Miracle, which broadcast on November 15, 1998, on CBS.

Kelly starred in the CBS drama To Have & to Hold opposite Jason Beghe before playing Mandy Hampton in the first season of The West Wing. In 2003, Kelly began playing single mother Karen Roe on the teen drama One Tree Hill. She also directed two episodes of the series: "Resolve" (2007) and "I Slept with Someone in Fall Out Boy and All I Got Was This Stupid Song Written About Me" (2006). In the fifth season, she ceased to be a regular cast member, but made guest appearances in the 100th episode and the sixth season finale. She has made guest appearances in television shows such as Heroes, Law & Order, and Numb3rs. Kelly has also appeared in the films Remember the Daze, A Smile as Big as the Moon and Taken Back: Finding Haley.