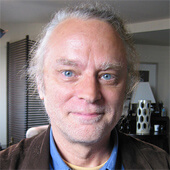 Bradford Claude "Brad" Dourif (born March 18, 1950) is an American stage, film and voice actor who gained early fame for his portrayal of Billy Bibbit inOne Flew Over the Cuckoo's Nest, which won him a Golden Globe Award and BAFTA Award, as well as a nomination for the Academy Award for Best Supporting Actor.

He portrayed Charles Lee Ray / Chucky (both live-action and voiceover) in the Child's Play franchise, Deputy Clinton Pell in Mississippi Burning, Younger Brother in Ragtime, Piter De Vries in David Lynch's Dune, Gríma Wormtongue in The Lord of the Rings, and Doc Cochran in Deadwood, for which he earned an Emmy Award nomination.

Dourif has worked with director Werner Herzog on many occasions, appearing in Scream of Stone, The Wild Blue Yonder, The Bad Lieutenant: Port of Call New Orleans, and My Son, My Son, What Have Ye Done?. From June to September 2013, he starred in an Off Broadway revival of Tennessee Williams' The Two-Character Play, his first stage appearance in 29 years.

Starting in school productions, he progressed to community theater, joining up with the Huntington Community Players, while attending Marshall University of Huntington. At age 19, he quit his hometown college and headed to New York City, where he worked with the Circle Repertory Company. During the early 1970s, Dourif appeared in a number of plays, off-Broadway and at Woodstock, New York, including Milos Forman who cast him in One Flew Over the Cuckoo's Nest (1975). Although this film is frequently cited as his film debut, in fact, Dourif made his first big-screen appearance with a bit part in W.W. and the Dixie Dancekings (1975). Nevertheless, his portrayal of the vulnerable Billy Bibbit in Forman's film was undoubtedly his big break, earning him a Golden Globe Award for Best Acting Debut, a British Academy Film Award for Best Supporting Actor, and an Oscar nomination for Best Supporting Actor.

Skeptical of his instant stardom, Dourif returned to New York, where he continued in theater and taught acting and directing classes at Columbia University until 1988 when he moved to Hollywood. Despite his attempts to avoid typecasting, his intensity destined him to play demented, deranged, or disturbed characters, starting in Eyes of Laura Mars (1978), John Huston's Wise Blood (1979) (arguably his best performance to date), and Milos Forman's Ragtime (1981). Dourif then teamed up with director David Lynch for Dune (1984) and Blue Velvet (1986). His high-strung style also served him well in a number of horror films, notably as the voice of the evil doll Chucky in Child's Play (1988) and its sequels.

Dourif broke from the horror genre with roles in Fatal Beauty (1987), Mississippi Burning (1988), Hidden Agenda (1990), and London Kills Me (1991). Recent film work includes the role of Grima Wormtongue in Peter Jackson's The Lord of the Rings trilogy. Since his television debut in the PBS film The Mound Builders (1976), Dourif has made sporadic appearances in a number of television series, such as The X-Files (1993), Babylon 5 (1994), Star Trek: Voyager (1995) and Ponderosa (2001) (in the recurring role of Frenchy).