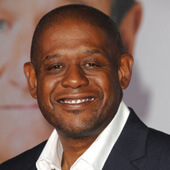 Forest Steven Whitaker has packaged a king-size talent into his hulking 6' 2", 220 lb. frame. He won an Academy Award for his performance as Ugandan dictator Idi Amin in the 2006 film The Last King of Scotland, and has also won a Golden Globe and a BAFTA. He is the fourth African-American male to win an Academy Award for Best Actor, following in the footsteps of Sidney Poitier, Denzel Washington, and Jamie Foxx.

Whitaker made his film debut at the age of 21 in the raucous comedy Fast Times at Ridgemont High (1982) wherein he played, quite naturally, a footballer. He went on to play another sports-oriented student, a wrestler, in his second film Vision Quest (1985). He gained experience on TV as well with featured spots on such varied shows as Diff'rent Strokes (1978) and Cagney & Lacey (1981), not to mention the TV-movie Civil War epic North and South (1985) and its sequel. The movie that truly put him on the map was The Color of Money (1986). His one big scene as a naive-looking pool player who out-hustles Paul Newman's Fast Eddie Felson was pure electricity. This led to more visible roles in the "A" class films Platoon (1986), Stakeout (1987), and Good Morning, Vietnam (1987), which culminated in his breakout lead portrayal of the tortured jazz icon 'Charlie "Bird" Parker' in Clint Eastwood's passion project Bird (1988), for which Whitaker won the Cannes Film Festival award for "best actor" and a Golden Globe nomination. Whitaker continued to work with a number of well-known directors throughout the 1990s.

In the early 1990s, Whitaker widened his horizons to include producing/directing and has since gained respect behind the camera as well. He started things off co-producing the violent gangster film A Rage in Harlem (1991), in which he co-starred with Gregory Hines and Robin Givens, and then made his successful directorial debut with the soulful Waiting to Exhale (1995), showcasing a legion of distaff black stars. He also directed co-star Whitney Houston's music video of the movie's theme song ("Shoop Shoop"). He also helmed the fluffy romantic comedy First Daughter (2004) with Katie Holmes and Michael Keaton. Whitaker also served as an executive producer on First Daughter. He had previously executive produced several made-for-television movies, most notably the 2002 Emmy-award winning Door to Door, starring William H. Macy. He produced these projects through his production company, Spirit Dance Entertainment, which he shut down in 2005 to concentrate on his acting career.

In 2002, he co-starred in Joel Schumacher's thriller, Phone Booth (2002), with Kiefer Sutherland and Colin Farrell. That year, he also co-starred with Jodie Foster in Panic Room (2002).

Whitaker's greatest success to date is the 2006 film, The Last King of Scotland (2006). His performance earned him the 2007 Academy Award for Best Actor in a Leading Role, For that same role, he also received the Golden Globe Award, the Screen Actors Guild Award, a BAFTA Award, and many critical accolades. He has also received several other honors. In September 2006, the 10th Annual Hollywood Film Festival presented him with its "Hollywood Actor of the Year Award," He was also honored at the Santa Barbara International Film Festival 2007, receiving the American Riviera Award. Previously, in 2005, the Deauville Festival of American Film paid tribute to him. In 2007, Forest Whitaker won the Cinema for Peace Award 2007.

In 2007, Whitaker co-starred in The Great Debaters (2007) with fellow Oscar winner Denzel Washington, and in 2008, Whitaker played opposite Keanu Reeves in Street Kings (2008)and Dennis Quaid in Vantage Point (2008).

In 2009, Forest co-starred in the Warner Bros. film Where the Wild Things Are (2009) directed by Spike Jonze, which was a mix of live-action, animation and puppetry as an adaptation of the Maurice Sendak classic children's book. Around the same time, he also starred in Repossession Mambo (2010), with Jude Law, Hurricane Season (2009), "Winged Creatures", and Powder Blue (2009). He appeared in the Olivier Dahan film My Own Love Song (2010), opposite Renee Zellweger, and was part of the Africa Movie Academy Awards in 2009, in Nigeria.