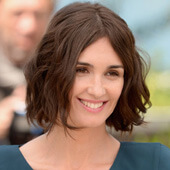 Actress Paz Campos Trigo was born in Seville, Spain, to a bullfighter father. She has been based in Los Angeles since 2008.

She has starred in dozens of films in Europe and North America. After six successful seasons as Laura in Seven Lives (Telecinco,) one of Spain's longest running sitcoms, the young Seville born actress makes her leap to the big screen, attracting the attention of Spanish and European audiences in 2001 when she won the Goya for Best New coming Actress with her performance as Lucia in Sex and Lucia by Julio Medem, as well as the prestigious Chopard Award for Best Actress at the Cannes International Film Festival. The film, as well as the actress, went on to receive several other important awards in Spain and across its borders.

Also in 2001, Paz starred in Solo Mia/ Only Mine (2001) by Javier Balaguer, opposite Sergi López and was nominated for yet another Goya Award, this time for Best Actress, marking a milestone in the history of the prestigious awards. For the first time, an actress was nominated twice for two different roles in one edition.

In 2002, Paz appears in Talk to Her (2002) by Pedro Almodóvar. The film received over thirty international awards, including the Academy Award for the Best Original Screenplay and the Golden Globe for best foreign language film, along with seven Goya Awards nominations. The same year, the actress starred in El Otro Lado de la Cama (2002) by Emilio Martínez Lázaro, one of the highest grossing Spanish comedies of all time.

In 2003, she was Carmen in Vicente Aranda's film, based on the homonymous novel by Prosper Mérimée, opposite Leonardo Sbaraglia. That same year, she pairs up with Santi Millán in the romantic comedy, Dí Que Sí/Say I Do (2003) for Columbia Pictures in Spain. Both films went on to have very successful box office careers in 2004. As a result of her collaboration with Columbia Pictures in "Dí Que Sí", James L. Brooks invited her to co-star in Spanglish opposite Adam Sandler. For her role, Paz won the Best Female Newcomer of the Phoenix Film Critics Society.

Since "Spanglish" Paz Vega has been directed by acclaimed filmmakers such as Frank Miller, Danis Tanovic, Oliver Parker, Michelle Placido and the Taviani brothers and shared billboard with fellow actors such as, Scarlett Johansson, Andie McDowell, Eva Mendes, Colin Farrell, not to mention the legendary Christopher Lee and Morgan Freeman, among others. Paz also starred in the first film directed by Jada Pinkett Smith, produced by Will Smith: The Human Contract.

Most recently, Paz repeated her collaboration with Spain's emblematic Director, Almodovar, in I'm So Excited released in 2013 and has lended her voice to the Andalusan horses in Madagascar 3: Europe's Most Wanted.

Paz Vega has performed in English, Spanish, French and Italian, in the United States, several European countries as well as Latin America. Recently, she has played the lead on Alfonso Pineda Ulloa's "Espectro" in Mexico.

The province of Andalucía and the city of Seville have repeatedly recognized the actress for her tireless work representing her native region and city throughout the world. Paz has, thus, been awarded the Medal of Andalucía, the Seville Medal and the prestigious Seville Gold Medal.