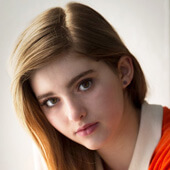 Willow Shields was born on June 1, 2000 in Albuquerque, New Mexico. She has a twin sister, actress Autumn Shields, and an older brother, actor River Shields. Willow got her first job in 2008, narrating the short film Las Vegas New Mexico 1875 (2008), the story of a dying gunfighter who returns home after 10 years to make peace with his wife and daughter.

Her first television role was a guest appearance in the USA series In Plain Sight (2008), which was filmed in her hometown of Albuquerque, followed by an episode in the teen-oriented horror anthology series R.L. Stine's The Haunting Hour (2010) and a supporting role in the Hallmark Hall of Fame television movie Beyond the Blackboard (2011) opposite Emily VanCamp. On the strength of those appearances alone, Willow was cast as Primrose Everdeen, the younger sister of heroine Katniss Everdeen, in The Hunger Games (2012), and will appear in the same role in all the upcoming films adapted from the bestselling novels by Suzanne Collins.