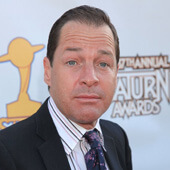 Stewart studied at the American Academy of Dramatic Arts and toured in regional theatre for seven years before breaking into television with the role of Razor Dee, a spaced-out DJ on the final season of The New WKRP in Cincinnati in 1992. Stewart earned his Screen Actors Guild card while working for Hanna-Barbera's Shakey Quakey tour, but was later terminated for removing the head of his costume in front of children. In 1996, he was cast on rd Rock from the Sun, which lasted for six seasons. On the show, Stewart was noted for his talents at physical comedy and his characteristic "squinting" facial expression. During the height and popularity of 3rd Rock from the Sun, Stewart appeared in numerous commercials and as a spokesperson for the beverage Clamato.

Since the end of 3rd Rock in 2001, Stewart has appeared in a number of minor roles, mainly in situation comedies such as Just Shoot Me!, Becker, The Drew Carey Show, Less Than Perfect and That '70s Show (from the same creators as 3rd Rock from the Sun). He also starred in the WB show Charmed as a genie at the end of season 2. He has starred in comedy films, with major roles in the direct-to-video films Home Alone 4 (2002) and Inspector Gadget 2 (2003). He also appeared as a guest star in the TV show, Phineas and Ferb, in the episode "Run Away Runway" as the fashion designer, Gaston Le Mode (2008).