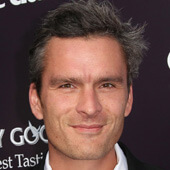 Paul Balthazar Getty (born January 22, 1975) is an American actor, member of the band Ringside, the producer-half of rap duo The Wow, and a member of the Getty family. He is known for having played the roles of Ralph in Lord of the Flies, Thomas Grace on the American action drama Alias and Tommy Walker on the American drama Brothers & Sisters, the latter two of which have aired on ABC.

Getty began his acting career at age 14 in 1989. He auditioned for the lead role in the movie Lord of the Flies after being spotted by a casting director, Robin Joy Allan, in his art class at school. During the 1990s and early 2000s, he appeared in the films Young Guns II, Natural Born Killers, Judge Dredd, Mr. Holland's Opus, White Squall, Lost Highway, Big City Blues, The Center of the World, Deuces Wild, Ladder 49, Feast, and the television miniseries Traffic.

Getty guest-starred on the television series Charmed as Richard Montana, a male witch romantically linked with Paige Matthews. He appeared in the fifth season of the television show Alias as Agent Thomas Grace. He starred, alongside Alias costar Ron Rifkin, in the ABC prime time drama Brothers & Sisters, which first aired in September 2006. Getty played the role of Thomas "Tommy" Walker, third-born of the five Walker siblings.

In late 2008, media reports indicated Getty's contract as a full-time series regular in Brothers & Sisters would not be renewed due, in part, to budgetary and storyline considerations. In the Season 4 premiere, Getty was still listed in the principal cast, but he did not appear. Getty made his return to the series in the sixth episode of Season 4. Although he no longer appeared in every episode, he continued to make appearances on the show until its cancellation.