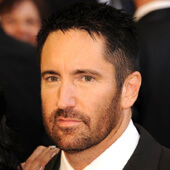 Trent Reznor is an American songwriter/musician/producer and sole member of multi-platinum act Nine Inch Nails, and now an Academy Award winning film composer. He began creating music as a child in Western Pennsylvania, first on piano and then taking up other instruments. He eventually moved to Cleveland, OH where he took a job at a local recording studio as an assistant engineer/janitor, recording his own material during unused studio time.

Those recordings became the first Nine Inch Nails album, 1989's Pretty Hate Machine. NIN soon developed a reputation as one of the best live acts in rock and joined the inaugural Lollapalooza tour in 1991. The Broken EP followed in 1992, garnering NIN's first Grammy Award (NIN has received twelve Grammy nominations and won two awards). In 1994, the breakthrough album The Downward Spiral was released and featured the radio hits "Closer" and "Hurt." The controversial music video for "Closer" was directed by Mark Romanek and is considered among the best music videos of all time having won various awards (it is one of the few music videos included in the permanent collection of the Museum of Modern Art in New York City). NIN's mud-covered appearance that Summer at Woodstock 1994 is now legendary. Also released that year was the Reznor produced soundtrack to Oliver Stone's Natural Born Killers. He returned to film 3 years later, producing the soundtrack for David Lynch's Lost Highway. In 1997, Reznor appeared on Time magazine's most influential people list, and Spin magazine named him "the most vital artist in music."

Five years later NIN's next album, The Fragile, was released - the double album debuted at number one. In 2002, "Hurt" was covered by Johnny Cash to critical acclaim; it was one of Cash's final hit releases before his death. NIN's next album, With Teeth, also reached number one in 2005 as did the single "The Hand That Feeds." Reznor broke new ground by posting the single's source tracks as a free download for fans to edit/remix/sample as they pleased and creating an online community for fans to share their creations. David Fincher directed the video for "Only," With Teeth's second single.

The concept album Year Zero was released in 2007 alongside an accompanying ARG (alternate reality game). Conceived by Trent Reznor and assisted in execution by 42 Entertainment, the ARG progressed through the album release and beyond, featuring no less than 29 websites, hidden messages within NIN merchandise, recordings and barcodes, hotlines, flier and poster campaigns, and even resistance cell "meetings" organized via calls made to pre-paid cell phones distributed to participants. Within two months, the ARG amassed 2.5 million cumulative site visits, 7.5 million cumulative page views and 2 million phone calls. Reznor has developed Year Zero into an HBO/BBC mini-series, currently in pre-production.

In 2008, free of contractual obligations, NIN released Ghosts I-IV, a 36-track instrumental album, NIN's first independent release. Soon after, a new studio album, The Slip, was released as a free digital download alongside a simple message: "Thank you for your continued and loyal support over the years - this one's on me" - TR (In less than a year, it exceeded 1.8M downloads). Ghosts I-IV and The Slip were both released under Creative Commons licenses allowing extensive use of the material within independent film projects. Following these two releases, NIN embarked on the acclaimed Lights In The Sky Tour featuring groundbreaking production effects, layering and programming that allowed the performers to interact and control aspects of the show's visuals. The tour was recognized by the industry as one of the top-ten most creative tours of all time.

Over the course of his career, Reznor has also collected countless production and remix credits including collaborations with David Bowie, producing Saul Williams and the discovery and production of Marilyn Manson.

In addition to his continued work in Nine Inch Nails, Reznor is recording new music as a member of the group How To Destroy Angels.