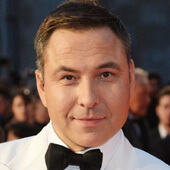 David Edward Walliams (born 20 August 1971), known as David Walliams, is an English comedian, actor, author, presenter, television presenter and activist, known for his partnership with Matt Lucas on the BBC One sketch shows Little Britain, Rock Profile and Come Fly with Me.

Since 2012 Walliams has been a judge on the ITV talent show Britain's Got Talent. He wrote and starred in two series of the BBC One sitcom Big School, playing the role of chemistry teacher Keith Church. In 2015 he starred as Tommy Beresford in the BBC series Partners in Crime based on the Tommy and Tuppence novels by Agatha Christie.

Walliams is also a writer of children's books. To date he has sold more than 12.5 million copies and his books have been translated into 46 languages. He has been described as "the fastest growing children's author in the UK": his literary style has been compared to that of Roald Dahl.