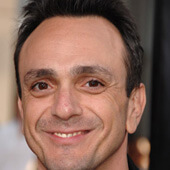 Henry Albert "Hank" Azaria (/əˈzɛəriə/ ə-ZAIR-ee-ə; born April 25, 1964) is an American actor, voice actor, comedian and producer. He is known for starring in the animated television sitcom The Simpsons (1989–present), voicing Moe Szyslak, Apu Nahasapeemapetilon, Chief Wiggum, Comic Book Guy, Carl Carlson and numerous others. After attending Tufts University, Azaria joined the series with little voice acting experience, but became a regular in its second season, with many of his performances on the show being based on famous actors and characters.

He also had recurring roles on the television series Mad About You and Friends, played the title character in the drama Huff (2004–2006), and appeared in the popular stage musical Spamalot. Though originally known as a comic actor, Azaria has also taken on more dramatic roles including the TV films Tuesdays With Morrie (1999) and Uprising (2001). He has won five Emmys and a Screen Actors Guild Award. Azaria was married to actress Helen Hunt from 1999 to 2000 and has been married to actress Katie Wright since 2007.