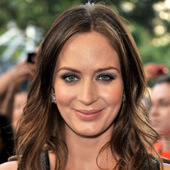 Emily Olivia Leah Blunt is a British actress known for her roles in The Young Victoria (2009) and The Devil Wears Prada (2006).

Blunt was born on February 23, 1983, in Roehampton, South West London, England, the second of four children in the family of Joanna Mackie, a former actress and teacher, and Oliver Simon Peter Blunt, a barrister. Her grandfather was Major General Peter Blunt, and her uncle is MP Crispin Blunt. Emily received a rigorous education at Ibstock Place School, a co-ed private school at Roehampton. However, young Emily Blunt had a stammer, since she was a kid of 8. Her mother took her to relaxation classes, which did not do anything. She reached a turning point at 12, when a teacher cleverly asked her to play a character with a different voice and said, "I really believe in you". Blunt ended up using a northern accent, and it did the trick, her stammer disappeared.

From 1999 - 2001, Blunt went to Hurtwood House, the top co-ed boarding school where she would excel at sport, cello and singing. She also had two years of drama studies at Hurtwood's theatre course. In August 2000, she was chosen to perform at the Edinburgh Festival. She was signed up by an agent, Kenneth Mcreddie, who led her to the West End and the BBC, scoring her roles in several period dramas on stage as well as on TV productions, such as Foyle's War (2002), Henry VIII (2003) and Empire (2005). In 2001, she appeared as "Gwen Cavendish" opposite Dame Judi Dench in Sir Peter Hall's production of "The Royal Family" at Haymarket Theatre. For that role, she won the Evening Standard Award for Best Newcomer. In 2002, she played "Juliet" in "Romeo and Juliet" at the prestigious Chichester Festival.

Blunt's career ascended to international fame after she starred as "Isolda" opposite Alex Kingston in Boudica (2003). A year later, she won critical acclaim for her breakout performance as "Tamsin", a well-educated, cynical and deceptive 16-year-old beauty in My Summer of Love (2004), a story of two lonely girls from the opposite ends of the social heap. Emily Blunt and her co-star, Natalie Press, shared an Evening Standard British Film award for Most Promising Newcomer. In 2005, she spent a few months in Australia filming Irresistible (2006) with Susan Sarandon and Sam Neill. Blunt gave an impressive performance as "Mara", a cunning young destroyer who acts crazy and surreptitiously provokes paranoia in others. She also continued her work on British television, starring as "Natasha" in Stephen Poliakoff's Gideon's Daughter (2005), opposite Bill Nighy, a role that won her a 2007 Golden Globe Award for Best Performance by an Actress in a Supporting Role.

She continued the line of playing manipulative characters as "Emily", a caustic put-upon assistant to Meryl Streep's lead in The Devil Wears Prada (2006). Blunt's performance with a neurotic twist added a dimension of sarcasm to the comedy, and gained her much attention as well as new jobs: in two dramas opposite Tom Hanks, then in the title role in the period drama, The Young Victoria (2009). Her most recent works include appearances as antiques dealer "Gwen Conliffe" in The Wolfman (2010) and as the ballerina in The Adjustment Bureau (2011).