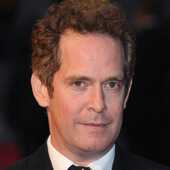 Thomas Anthony "Tom" Hollander (born 25 August 1967) is an English actor. He began his career in theatre, winning the Ian Charleson Award in 1992 for his performance as Witwoud in The Way of the World at the Lyric Hammersmith Theatre. He is known for his roles in comedic films such as Pirates of the Caribbean and In the Loop and drama films such as Enigma, Pride & Prejudice, Gosford Park and Hanna. He played the lead role in the sitcom Rev., which won the British Academy Television Award for best sitcom in 2011. He also starred in the BBC series The Night Manager and ITV's Doctor Thorne.

From September 2016 he will portray Henry Carr in a revival of Tom Stoppard's Play Travesties at the Menier Chocolate Factory, directed by Patrick Marber. He plays Dr Sorgh in the film Tulip Fever which is due for US release in February 2017. The screenplay, also by Tom Stoppard, is an adaptation of Deborah Moggach's historical novel.