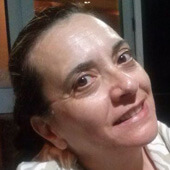 Eleni is a trilingual Producer/Associate Producer/Executive Producer/Talent Agent or Manager, a Fully Qualified German and International Lawyer with a US Masters in International Law, and an International Business and Development Consultant in Film & Entertainment Industry. She was born in Greece, grew up and lived in Greece, as well as in Germany and last 12 years in the USA. Currently she is a resident of USA (CA) and of Greece (Thessaloniki). She is active in the Entertainment Market Worldwide.

Her involvement within the entertainment industry began in 2004 as a business consultant for producers. She continued this and also worked to find financing for projects in other markets worldwide. In 2014 she choose to become more active within entertainment by supporting screenplay writers and authors helping them find the right home for their artistic work. In conjunction, she assisted producers to locate financing, evaluate possible tax incentives, subsidies and grants.

Currently, she is working with different producers and screenplay writers worldwide on very attractive features. She is also engaged with talents, film studios, distribution companies, entertainment specialized CPA's and has many other connections and resources adept at financing films.