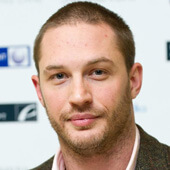 In 2010, Hardy starred as Eames in Christopher Nolan's science fiction thriller Inception for which he won a BAFTA Rising Star award. Hardy replaced Michael Fassbender in the 2011 film adaptation of Tinker Tailor Soldier Spy, released on 5 September 2011 at the 68th edition of the Mostra Internazionale d'Arte Cinematografica in Venice. In March 2010, Hardy signed a first look deal at Warner Bros.

In 2011, Hardy starred in the film Warrior, which was released on 9 September 2011 by Lionsgate Films. His performance as Tommy Riordan, who is trained by his father to fight in a mixed martial arts tournament against his brother, gained praise from critics. Hardy also starred in This Means War, a 2012 romantic comedy film directed by McG. He played the villain Bane in The Dark Knight Rises, the final film in Christopher Nolan's Batman trilogy, released on 20 July 2012.