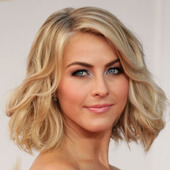 Julianne Alexandra Hough was raised in Salt Lake City, the youngest of 5 children. She is the daughter of Mari Anne (Heaton) and Bruce Robert Hough, twice chairman of the Utah Republican Party. Her parents met in college when both were part of a ballroom dancing team. Her parents divorced, and she has 9 stepsiblings from their second marriages.

Her mother was instrumental in her career in entertainment, enrolling her and her siblings in various performance classes from a very young age. She began her training in Latin ballroom dancing at the Center Stage Performing Arts Studio in Orem, Utah. At age 10, along with her brother Derek Hough, she went to London to study with coaches Corky and Shirley Ballas. She and Derek attended the Italia Conti Academy with the Ballas's son, Mark Ballas. The three children performed as a pop music trio '2B1G' (2 Boys, 1 Girl) at dance competitions in the United Kingdom and the United States. At age 15, Julianne became Junior World Latin Champion and International Latin Youth Champion at the Blackpool Dance Festival.

During this time in London, her parents divorced. She returned to the United States to live with her mother in Las Vegas, where she attended the Las Vegas Academy. After a year, she moved back to Utah to live with her father and graduated from Alta High School. She then moved to Los Angeles to begin a career in entertainment. Julianne quickly landed her first job as a dancer on ABC game show Show Me the Money (2006). She then went on tour as a company dancer with "Dancing with the Stars" and joined the cast of Dancing with the Stars (2005) in season 4.

Julianne is also known as a country singer. She released her debut album in 2008, debuting at #1 on the Billboard Country Album chart and at #3 on the Billboard 200. Her first acting role was in Harry Potter and the Philosopher's Stone (2001) at age 13. She has appeared in her first lead role in the remake of Footloose (2011).