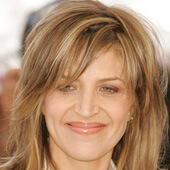 Fiennes made her directorial debut with the film Onegin – an adaptation of Alexander Pushkin's verse novel Eugene Onegin, which starred her brother Ralph in the title role. The film received much praise, and she won the Best Director Award at the Tokyo Film Festival and the Best Newcomer at the London Film Critics' Circle. Following Onegin, Fiennes wrote her second feature film, Chromophobia – an original multi-stranded drama, which comprised an all star cast and which closed the Cannes Film Festival of 2005.