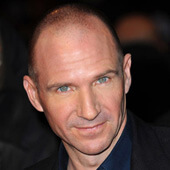 Ralph Nathaniel Twisleton-Wykeham-Fiennes was born on December 22, 1962 in Suffolk, England, to Jennifer Anne Mary Alleyne (Lash), a novelist, and Mark Fiennes, a photographer. He is the eldest of six children. Four of his siblings are also in the arts: Martha Fiennes, a director; Magnus Fiennes, a musician; Sophie Fiennes, a producer; and Joseph Fiennes, an actor. He is of English, Irish, and Scottish origin.

Fiennes made his feature film directorial debut with a contemporary version of Shakespeare's political thriller Coriolanus (2011), in which he also starred with Gerard Butler and Vanessa Redgrave. He starred next in Mike Newell's screen adaptation of Charles Dickens' Great Expectations (2012), with Helena Bonham Carter and Jeremy Irvine, and in Skyfall (2012), the next film in the Bond series, from director Sam Mendes.

In 2015, Fiennes played a music producer in Luca Guadagnino's A Bigger Splash (2015), starring opposite Tilda Swinton and Matthias Schoenaerts.