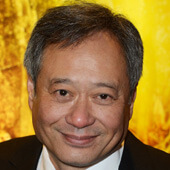 Born in 1954 in Pingtung, Taiwan, Ang Lee has become one of today's greatest contemporary filmmakers. Ang graduated from the National Taiwan College of Arts in 1975 and then came to the U.S. to receive a B.F.A. Degree in Theatre/Theater Direction at the University of Illinois at Urbana-Champaign, and a Masters Degree in Film Production at New York University. At NYU, he served as Assistant Director on Spike Lee's student film, Joe's Bed-Stuy Barbershop: We Cut Heads (1983).

After Lee wrote a couple of screenplays, he eventually appeared on the film scene with Pushing Hands (1992) (aka Pushing Hands), a dramatic-comedy reflecting on generational conflicts and cultural adaptation, centering on the metaphor of the grandfather's Tai-Chi technique of "Pushing Hands". The Wedding Banquet (1993) was Lee's next film, an exploration of cultural and generational conflicts through a homosexual Taiwanese man who feigns a marriage in order to satisfy the traditional demands of his Taiwanese parents. It garnered Golden Globe and Oscar nominations, and won a Golden Bear at the Berlin Film Festival. The third movie in his trilogy of Taiwanese-Culture/Generation films, all of them featuring his patriarch figure Sihung Lung, was Eat Drink Man Woman (1994), which received a Best Foreign Film Oscar nomination.

Lee followed this with Sense and Sensibility (1995), his first Hollywood-mainstream movie. It acquired a Best Picture Oscar nomination, and won Best Adapted Screenplay, for the film's screenwriter and lead actress, Emma Thompson. Lee was also voted the year's Best Director by the National Board of Review and the New York Film Critics Circle. Lee and frequent collaborator James Schamus next filmed The Ice Storm (1997), an adaptation of Rick Moody's novel involving 1970s New England suburbia. The movie acquired the 1997 Best Screenplay at Cannes for screenwriter James Schamus, among other accolades. The Civil War drama Ride with the Devil (1999) soon followed and received critical praise, but it was Lee's Crouching Tiger, Hidden Dragon (2000) that is considered one of his greatest works, a sprawling period film and martial-arts epic that dealt with love, loyalty and loss. It swept the Oscar nominations, eventually winning Best Foreign Language Film, as well as Best Director at the Golden Globes, and became the highest grossing foreign-language film ever released in America.

Lee then filmed the comic-book adaptation, Hulk (2003) - an elegantly and skillfully made film with nice action scenes. Lee has also shot a short film - Chosen (2001) (aka Hire, The Chosen) - and most recently won the 2005 Best Director Academy Award for Brokeback Mountain (2005), a film based on a short story by Annie Proulx. In 2012 Lee directed Life of Pi which earned 11 Academy Award nominations and went on to win the Academy Award for Best Director. In 2013 Ang Lee was selected as a member of the main competition jury at the 2013 Cannes Film Festival.