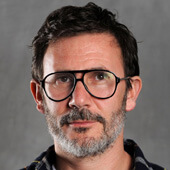 Michel Hazanavicius was born and raised in Paris, France. His grandparents were originally from Lithuania, but relocated to France in the 1920s. Hazanavicius attended art school, and moved on to work as a director for commercials and television projects. In 1999, he wrote and directed his first feature film Mes amis (1999), which featured his brother Serge Hazanavicius. His next feature film, spy parody, OSS 117: Cairo, Nest of Spies (2006) was a success at the French box office, and warranted a sequel, OSS 117: Lost in Rio (2009), which was also a hit. Hazanavicius came to the attention of international audiences with the release of an almost wordless film, The Artist (2011), which starred his wife, Bérénice Bejo and OSS 117 star Jean Dujardin. The film was a critical and popular hit, garnering many major nominations and awards.

He contributed a section to the omnibus film The Players (Les Infidèles) starring Jean Dujardin. He has announced that his next feature film will be a remake of the 1948 Fred Zinnemann film The Search. The film will star Berenice Bejo in the Montgomery Clift role as an NGO worker helping a little boy find his family in modern-day Chechnya and will be produced by Thomas Langmann. Golden Globe Award actress winner Annette Bening will star in the film.