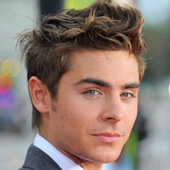 After appearing on-stage in "Peter Pan", "Auntie Mame", "Little Shop of Horrors" and "The Music Man", guest parts quickly followed on television series, including Firefly (2002), ER (1994), CSI: Miami (2002), NCIS (2003), and The Guardian (2001). After guest-starring in several episodes of Summerland (2004), Zac joined the regular cast as girl-crazy Cameron Bale. He also starred in several pilots, such as The Big Wide World of Carl Laemke (2003) and Triple Play (2004), and played an autistic child in the television movie The Unexpected Journey (2004), alongside Mary-Louise Parker and Aidan Quinn. He graduated from Arroyo Grande High School in June 2006.

Efron came to fame for starring in the Disney Channel original film High School Musical (2006), for which he won the Teen Choice Award for Breakout Star. He returned to the role of Troy Bolton in High School Musical 2 (2007), which broke cable TV records with 17.5 million viewers.

He played title roles of the fantasy romance The Death and Life of Charlie St. Cloud (2010) and the comedy Again (2009), both from director Burr Steers, and as the lovable Link Larkin in 2007's smash hit musical Hairspray (2007), directed by Adam Shankman. As part of the all-star cast he shared a Critics Choice Award for Best Acting Ensemble, the 2007 Hollywood Film Festival Award for Ensemble of the Year, and was honored with a Screen Actors Guild Award® nomination for Outstanding Motion Picture Cast. In addition, he won an MTV Movie Award for Breakthrough Performance.

Efron also starred in Richard Linklater's Me and Orson Welles (2008), an adaptation of the novel by Robert Kaplow, which premiered to rave reviews at the 2008 Toronto Film Festival. That same year, he starred in Kenny Ortega's High School Musical 3: Senior Year (2008), which set a box office record for the highest grossing opening weekend for a musical.

In 2012, Efron took the lead in The Lucky One (2012), a film adaptation of the Nicholas Sparks novel, playing a marine who returns to North Carolina after serving in Iraq in search for the unknown woman he believes was his good luck charm during the war. He also lent his voice to the animated feature Dr. Seuss' The Lorax (2012), and co-starred in Lee Daniels' thriller The Paperboy (2012), alongside Nicole Kidman, John Cusack, Matthew McConaughey and Scott Glenn, as well as Josh Radnor's Liberal Arts (2012), which premiered to rave reviews at the Sundance Film Festival. Another indie film he co-starred in, At Any Price (2012), was released in 2013.