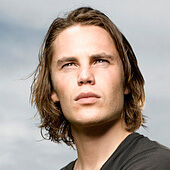 Taylor Kitsch was born on April 8, 1981 in Kelowna, British Columbia, Canada, and grew up in Vancouver. Growing up, he aspired to become an actor, which eventually was the real reason behind his move to New York. There, Taylor pursued his dreams by studying the art of acting with coach Sheila Grey. Not too long after that, Taylor was cast in several film and television roles, such as John Tucker Must Die (2006), Snakes on a Plane (2006) and Kyle XY (2006).

Moving to New York in 2002 was the prize that Taylor received after being scouted by modeling scouts in Canada. Taylor was signed to "IMG Models" and became a regular face for the famous clothing lines, "Abercrombie & Fitch" and also "Diesel". Taylor was also signed under "Untitled Entertainment" during his two years stay in the city. While Taylor was living in New York, he found time to become a certified personal trainer and nutritionist. In the year 2004, Taylor decided that it was time for him to move to Los Angeles to learn more about the acting course. Taylor stayed in Los Angeles for about eight months and did some print work with "Nous Modeling Management". It wasn't too long until Taylor realized that he didn't want to be in Los Angeles. Taylor thought that things were running a little bit too fast for him, then making the decision to move back to Vancouver for the summer of 2005 to spend more time with his family. In 2006, Taylor then signed with "Endeavour".

What shot him to bigger fame was his role in the movie, The Covenant (2006), with actors Steven Strait, Toby Hemingway and Chace Crawford. In the stylish thriller from Lakeshore Entertainment and Sony Screen Gems, four young witches do battle with a powerful, centuries-old supernatural force. In "The Covenant", fans got to know who Taylor really is. Even though the movie wasn't as successful as people hoped it would be, Taylor became more recognized since acting in the movie. In the movie, fans also got to see a more fit and toned version of Taylor.

Fortunately, after "The Covenant", casting directors from the football teen drama, Friday Night Lights (2006), saw the talent that Taylor had. They eventually hired Taylor to play the role of "Tim Riggins", one of the Dillon Panthers' main players. On "Friday Night Lights", Taylor managed to show his acting skills to fans and television critics who were very impressed with Taylor's acting skills. USA Today called the series "one of the best-acted, best-written, best-produced shows on television". After receiving fame and gaining a big fan base from "Friday Night Lights", Taylor received the acting publicity he had always been waiting for.

During the show's summer hiatus, Taylor filmed the feature Gospel Hill (2008), alongside Julia Stiles, Danny Glover, Angela Bassett and Samuel L. Jackson. Directed by Giancarlo Esposito, the film focuses on the bigoted former sheriff of a southern town and a one-time civil rights worker whose intersecting lives are still haunted by events that took place decades earlier. Old wounds are reopened as residents of a black neighborhood are forced out of their homes to make way for a multi-million dollar development.

In February 2008, he signed on to play "Gambit" in the "X-Men" franchise spin-off, X-Men Origins: Wolverine (2009). He subsequently starred in the films The Bang Bang Club (2010), John Carter (2012), Battleship (2012), and Savages (2012). Despite being famous, Taylor is still a very humble guy and has said that he'd prefer to skip the whole tabloid craze. During his free time, he enjoys doing charity work and listening to music, especially those in the country genre. With all the success and a humble attitude, we're pretty sure that Taylor is going to be one of the "Must Watch" stars for the coming years.