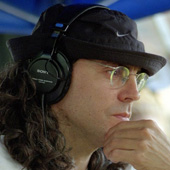 Thomas Peter "Tom" Shadyac (born December 11, 1958) is an American comedian, director, screenwriter, producer, author and occasional film actor. Shadyac, who was the youngest joke-writer ever for comedian Bob Hope, is widely known for writing and directing the comedy films Ace Ventura: Pet Detective, The Nutty Professor, Liar Liar, and Bruce Almighty. In 2010, Shadyac departed from comedic work to write, direct, and narrate the documentary film I Am, in which he explores his abandonment of a materialistic lifestyle following a bicycle accident in 2007.

Shadyac moved to Los Angeles in 1983 and, at age 24, was Hope's staff joke writer. Shadyac briefly acted during the 1980s, appearing in an episode of Magnum, P.I. and in the 1987 film Jocks. He then worked on movies-of-the-week, rewritten and directed for 20th Century Fox.

Ace Ventura: Pet Detective was Shadyac's first major film success and featured an up-and-coming Jim Carrey, described by Shadyac as "the only white guy in Living Color". Following Ace Ventura: Pet Detective, Shadyac attained a prominent status in Hollywood and received frequent offers from significant figures in the comedy industry, keen to collaborate with him. He frequently cast Carrey in lead roles and his hit films with Carrey include Bruce Almighty, Liar Liar, and the Ace Ventura movie series.

Examples of other Shadyac films include his collaboration with Eddie Murphy on The Nutty Professor movie series; Patch Adams, starring Robin Williams; Dragonfly with Kevin Costner; and Evan Almighty, the sequel to Bruce Almighty. He was also the executive producer of the ABC TV series Simple Rules for Dating My Teenage Daughter.

In his 2011 documentary I Am, which follows Shadyac in the aftermath of a bicycle accident in which he suffered significant injuries, he interviews scientists, religious leaders, environmentalists and philosophers, including David Suzuki, Desmond Tutu, Noam Chomsky, Lynne McTaggart, Elisabet Sahtouris, Howard Zinn and Thom Hartmann. The film asks two central questions: What’s Wrong With the World? and What Can We Do About it? The film is about "human connectedness, happiness, and the human spirit," and explores Shadyac's personal journey, "the nature of humanity" and the "world's ever-growing addiction to materialism." The film received a twenty-minute standing ovation at its premiere screening.