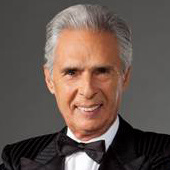 William "Bill" Conti (born April 13, 1942) is an American composer and conductor best known for his film scores, including Rocky (and four of its sequels), For Your Eyes Only, Dynasty, and The Right Stuff, which earned him an Academy Award for Best Original Score. He also received nominations in the Best Original Song category for "Gonna Fly Now" from Rocky and for the title song of For Your Eyes Only. He has served as musical director at the Academy Awards a record nineteen times.

His big break into celebrity came in 1976, when he was hired to compose the music for a small United Artists film called Rocky. The film became a phenomenon. Conti's training montage tune, "Gonna Fly Now", topped the Billboard singles chart in 1977, and earned him an Academy Award nomination for Best Original Song. The film won three Oscars at the 49th Academy Awards, including Best Picture. The same ceremony was also the first time Conti served as musical director for the Academy Awards, which he has done 18 times subsequently, more than anybody else.

Conti also worked for some other films and, eventually, for television series. In 1981, he wrote the music for the James Bond film, For Your Eyes Only, when John Barry was unwilling to return to the United Kingdom for tax reasons, and provided the score for playwright Jason Miller's film version of his Pulitzer Prize winning play That Championship Season the following year.

In 1983, he composed the score for HBO's first film, The Terry Fox Story. Conti composed music for the films Bad Boys and Mass Appeal. Then in 1984, he received an Academy Award for composing the score to 1983's The Right Stuff followed by composing music for the TV series North and South in 1985. He also composed the score for The Karate Kid as well as the Masters of the Universe live action movie. Another Conti score was the 1987 film Happy New Year.

He also composed the classic themes to television's Dynasty (as well as doing the score for the three-hour pilot, and episode after that), The Colbys, Falcon Crest and its pilot score, and Cagney & Lacey. Conti also composed the theme song to the original version of American Gladiators, worked with CBS on their 1980s movie jingle, composed one of the early themes to Inside Edition, and wrote the theme to Primetime Live for ABC News. In addition he composed the score to the studio altered American version of Luc Besson's The Big Blue.

Two of Conti's previously composed works were re-used for the show Lifestyles of the Rich and Famous. These were the love theme "Come With Me Now" from the soundtrack for Five Days From Home (used for the show's main theme), and "Runaway", from For Your Eyes Only (used for in-show content).

Conti has also received thirteen Emmy nominations, all but one of which are for his role as musical director at the Academy Awards (the exception, his first nomination, was for his music for the 1985 series North and South). He has won three Emmy Awards for Outstanding Musical Direction for the 64th, 70th and 75th Academy Award ceremonies.

On April 22, 2008 at the LSU Union Theatre at Louisiana State University, Conti was inducted into the Louisiana Music Hall of Fame.