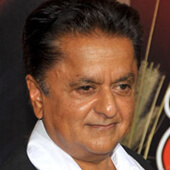 Deep Roy (born Mohinder Purba; 1 December 1957), sometimes credited as Roy Deep, is a Kenyan-English actor, stuntman, puppeteer, comedian. Due to his diminutive size, he has appeared in a number of similar-sized roles, such as the Oompa-Loompas in Charlie and the Chocolate Factory, Keenser in Star Trek, and in television series such as The X-Files, Doctor Who and Eastbound & Down.

Roy was born in Nairobi, Kenya, to Indian parents. He made his professional screen acting debut in a 1976 episode of The New Avengers entitled "Target!" as a character named Klokoe. He would later make his film debut that same year, in The Pink Panther Strikes Again, as the Italian Assassin. Another early role was as Mr. Sin, the "pig-brained Peking Homonculus", a villain with a distinct appetite for homicide, in the Doctor Who serial The Talons of Weng-Chiang. In 1979, Roy also played a genetically engineered life form 'Decima' in the first season Blake's 7 episode "The Web" as well as the diminutive chess genius, 'The Klute', in the second season Blake's 7 episode "Gambit".

He has played apes in two movies: Greystoke - The Legend of Tarzan, Lord of the Apes and again in the Tim Burton remake of Planet of the Apes (2001) in two roles: one as a young gorilla boy and as Thade's niece. He has worked for Burton in three other films, Big Fish (2003), Charlie and the Chocolate Factory (2005) and Corpse Bride (also 2005) where he supplied General Bonesapart's voice. He played all the Oompa-Loompas (165 of them) in Charlie and the Chocolate Factory. Deep had extensive training for the role in dance, yoga, and some minor instrument playing.

He has done many other roles in movies and on television, including The X-Files, Flash Gordon, Return to Oz (as the Tin Woodsman), Jim Henson's The Dark Crystal as a puppeteer extra, The NeverEnding Story as Teeny Weeny, the rider of the "racing snail", Alien from L.A., Howling VI: The Freaks as Mr Toones and Return of the Jedi as Droopy McCool and in The Haunted Mansion.

He appeared in Transformers: Revenge of the Fallen (2009) as an Egyptian border guard and in the film Star Trek (also 2009) as Keenser, Montgomery Scott's assistant on the ice planet Delta Vega. Roy played a green man while doing a commercial shoot for Ozocleanse. In one of his more prominent speaking roles, Roy played Aaron, a violent Mumbai-born Mexican criminal, in second season of the HBO comedy, Eastbound & Down. Deep starred as Sandeep Majumdar in the 2012 short film The Ballad of Sandeep.