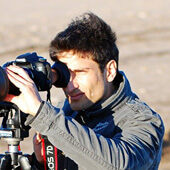 Cesar is an Argentine native. A master in CGI. Having learned his craft contributing to many History Channel television shows, Cesar Turturro has turned to his first love, SciFi, for his first feature length film, "Ocassus". Cesar is the principal at Creavision, an audiovisual production company that specializes in 3d Animation and VFX.

At 21 he founded his company Creavision. From there, I did not stop. At 24 I shot his first feature film called "1982 were there". Later he made his first documentary "Volunteers" on Argentine pilots in the RAF. And in 2009 he released "1982 War from the air" as director and producer for The History Channel. Then came several works as director of VFX in documentaries such as "Latin America Without Human" and the series "Alien Contact”.

In 2014 internet release a fan film called "Valkyrie project" with great impact on networks, to the point that received a C & D production company in the US. This fact, although it was negative since forced to remove all the material done, catapulted him directly to the US where he was hired by the same company to run the animation team that was behind the campaign Kickstarter "Robotech Academy".