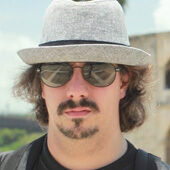 With almost 25 years of experience in the audiovisual industry, he has worked and work in multiple formats. Journalist training, is a researcher, writer, playwright, preproductor, producer and post-producer. It also tends to run their projects. Basically it continues from the moment of conception to the broadcast.

As a playwright, he has written, directed and premiered two plays ("Happy Birthday Destiny" and "Stealing Light"), and working on the third.

Currently in addition to the production of documentaries, which channeled through his production company "Volga productions" (Founded in 2010), coordinates a team of writers with whom we develop the film adaptation of the book "Mary Islands" of Estela Saenz Mendez and works in the "Ocassus" project and fiction adaptation of a true story that occurred during the Falklands war.