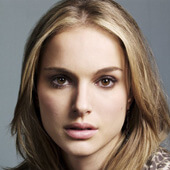 Natalie Portman was born Natalie Hershlag on June 9, 1981, in Jerusalem, Israel, to a Jewish family. She is the only child of Avner Hershlag, an Israeli-born doctor, and Shelley Stevens, an American-born artist (from Cincinnati, Ohio), who also acts as Natalie's agent. She left Israel for Washington, D.C., when she was still very young. After a few more moves, her family finally settled in New York, where she still lives to this day. She graduated with honors, and her academic achievements allowed her to attend Harvard University. She was discovered by an agent in a pizza parlor at the age of 11. She was pushed towards a career in modeling but she decided that she would rather pursue a career in acting. She was featured in many live performances, but she made her powerful film debut in the movie Léon (1994) (aka "Léon"). Following this role Natalie won roles in such films as Heat (1995), Beautiful Girls (1996), and Mars Attacks! (1996).

It was not until 1999 that Natalie received worldwide fame as Queen Amidala in the highly anticipated US$431 million-grossing prequel Star Wars: Episode I - The Phantom Menace (1999). She then she starred in two critically acclaimed comedy dramas, Anywhere But Here (1999) and Where the Heart Is (2000), followed by Closer (2004), for which she received an Oscar nomination. She reprised her role as Padme Amidala in the last two episodes of the Star Wars prequel trilogy: Star Wars: Episode II - Attack of the Clones (2002) and Star Wars: Episode III - Revenge of the Sith (2005).

Portman won a Golden Globe and was nominated for an Academy Award for starring in the 2004 drama Closer, and won a Constellation Award for Best Female Performance and a Saturn Award for Best Actress for her starring role in the political thriller V for Vendetta (2006). She played leading roles in the historical dramas Goya's Ghosts (2006) and The Other Boleyn Girl (2008), and also appeared in Thor (2011) and its 2013 sequel. In 2010, Portman starred in the psychological horror film Black Swan. Her performance received widespread critical acclaim and she earned her first Academy Award for Best Actress, her second Golden Globe Award, the SAG Award, the BAFTA Award and the BFCA Award in 2011.

In May 2008, Portman served as the youngest member of the 61st Annual Cannes Film Festival jury. The same year she directed a segment of the collective film New York, I Love You. Her first feature film as a director, A Tale of Love and Darkness, was released in 2015.