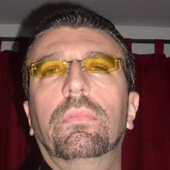 Born In Italy, he moved to study and work in USA. He started his first movie in 1993.

He works from concept-to-completion on each film, developing the ideas, assembling the creative team, & delivering a finished production to the distributor. In every project, he is part filmmaker/part consultant/part workaholic.

His distinctive approach to filmmaking has attracted a client list that includes , celebrities, rock stars and other filmmakers.

Max's work has been featured in national and international film festivals. He has been a celebrity expert and film reviewer on various blog and video blogs such as Horror Palace and many more.