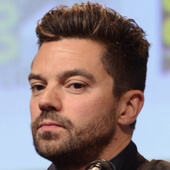 He first worked in television and film before making his stage debut in Mother Clap's Molly House at the National Theatre in 2001. Cooper was involved in Alan Bennett's play The History Boys from its first reading. He also toured with the production to Broadway, Sydney, Wellington and Hong Kong as well as appearing in the radio and film adaptations of the play. He has had notable roles in the Royal National Theatre's adaptation of the His Dark Materials trilogy where he played the lead character Will Parry, the TV series Down To Earth and Sense & Sensibility.

In 2008, he appeared as Sky in Mamma Mia!, in which he sang several songs. The same year, he appeared opposite Keira Knightley in The Duchess as Charles Grey, 2nd Earl Grey. Cooper starred in films An Education and Freefall in 2009, and also played Hippolytus in Phedre at the National Theatre alongside Helen Mirren and Margaret Tyzack.

In 2010, he played rock-drummer Ben in the film Tamara Drewe, and in 2011 played the leading roles of Latif Yahia and Uday Hussein in the biographical film The Devil's Double and portrayed Milton H. Greene in My Week with Marilyn. 2011 was also the year Cooper first appeared as Howard Stark in the Marvel Cinematic Universe. Initially appearing in the film Captain America: The First Avenger, he reprised his role in the Marvel One-Shot Agent Carter two years later, and in the television series of the same name in 2015 and 2016.

In 2012, he appeared as vampire Henry Sturges in Abraham Lincoln: Vampire Hunter and in 2014, he portrayed the main antagonist in two films: Dino Brewster in Need for Speed and Mehmed in Dracula Untold. Cooper depicted James Bond author Ian Fleming in the television mini-series Fleming: The Man Who Would Be Bond in 2014. The next year, Cooper appeared in two films, Miss You Already and The Lady in the Van.

Cooper plays Jesse Custer, the lead role in AMC's Preacher; the programme debuted in May 2016. Cooper co-starred in the Warcraft film adaptation, which was released in June 2016.