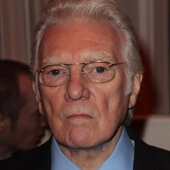 Alan Ford (born 23 February 1938) is an English actor. He is best known for his roles in the Guy Ritchie crime capers Lock, Stock and Two Smoking Barrels and Snatch, and from guest starring in The Bill.

Ford appeared in Exorcist: The Beginning and, much earlier, as 'Roosta' in the original radio version of The Hitchhiker's Guide to the Galaxy, along with a small speaking role in the British gangster film The Long Good Friday.

Ford played Clifford Harding in G.F. Newman's Law & Order in 1978, then had a brief role in the film An American Werewolf in London, where he plays the taxi driver who says the line, "It puts you in mind of the days of the old demon barber of Fleet Street, doesn't it?" in response to the recent wave of murders around London. He has also proved himself a comic actor. He was involved in the Armando Iannucci production Knowing Me, Knowing You with Alan Partridge, playing a boxing promoter called Terry Norton; and he worked again with Iannucci playing the 'East End Thug' in The Armando Iannucci Shows. He later appeared as a priest in every episode of Snuff Box. In 2015, he played former Thotch band manager 'Big' Basil Steel in Brian Pern: 45 Years of Prog & Roll.

In 1998, Ford narrated and appeared in the Guy Ritchie directed crime comedy Lock, Stock and Two Smoking Barrels, and, in 2000, he appeared in his most memorable role as crime boss 'Brick Top' in Ritchie's film Snatch.

Ford was featured in the 2010 music video "For He's a Jolly Good Felon" by Welsh rockers Lostprophets.

2011 saw him starring as crime boss 'Carter' in the British film noir Jack Falls alongside his Lock, Stock co-stars Jason Flemyng and Dexter Fletcher, while in 2014, he was cast in the British crime thriller Two Days in the Smoke alongside fellow Lock, Stock actor Stephen Marcus.

In 2013 Ford had a guest role in the Norwegian-American TV show Lilyhammer as crime family boss 'Uncle Terry'.