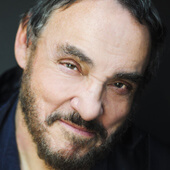 Rhys-Davies, who was raised in England, Africa and Wales, credits his early exposure to classic literature for his decision to pursue acting and writing. he later refined his craft at London's renowned Royal Academy of Dramatic Arts. His television credits include James Clavell's Shogun (1980) and Noble House (1988), Great Expectations (1989), War and Remembrance (1988) and Archaeology (1991).

An avid collector of vintage automobiles, Rhys-Davies has a host of theater roles to his credit, including "The Misanthrope", "Hedda Gabler" and most of Shakespeare's works. He divides his time between Los Angeles and the Isle of Man.