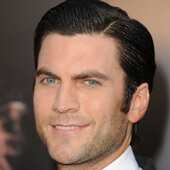 Wes Bentley is an American actor who first became well-known via his role in the Oscar-winning film American Beauty (1999), in which he played the soulful, artistic next-door neighbor Ricky Fitts. He also portrayed gamemaker Seneca Crane in The Hunger Games (2012), and co-stars in Lovelace (2013) as photographer Thomas.

Wesley Cook Bentley was born September 4, 1978, in Jonesboro, Arkansas, to David and Cherie Bentley, two Methodist ministers. Wes joined older brothers Jamey and Philip, and was later joined by younger brother, Patrick. Wes attended Sylvan Hills High School in Sherwood, Arkansas, where he was in the drama club. Interest in acting came from Improv Comedy. He, his brother Patrick, his best friend Damien Bunting and other close friend Josh Cowdery developed an Improv group called B(3) + C. They regularly dominated competitions in Arkansas. He then placed First in the state of Arkansas in solo acting in 1996, his senior year of high school, Second in Duet, and also regularly won for Poetry and Prose Readings.

Wes appeared on-stage quite a bit in Little Rock. At The Weekend Theater, Wes played the straight son of the gay couple in a production of La Cage aux Folles. At Murry's Dinner Playhouse, Wes' plays included Oliver. At his mother's urging, Wes attended Juilliard School in New York after high school graduation. He was there only a short time but appeared in stage work like Henry IV, Part 1 and The Weavers. Wes then worked at Blockbuster and was a waiter at TGI Friday's on Long Island. Wes has stated that his most prideful venture in life was starting a soccer team from scratch at his high school and subsequently putting together a full Conference, one of Arkansas's first. Wes had no real experience in soccer before doing this.

Bentley made his onscreen debut in Jonathan Demme's Beloved (1998). Following his success in American Beauty, Bentley struggled with substance abuse, which cost him his first marriage, to actress Jennifer Quanz. Although he continued to land parts in films, including that of the primary antagonist in Ghost Rider (2007) and another major role in The Game of Their Lives (2005), Bentley has publicly admitted that during most of the 2000s he only took on acting roles to earn enough money to buy drugs.

Bentley is best known for his roles as Ricky Fitts in American Beauty (1999), Blackheart in Ghost Rider (2007), Thomas in P2 (2007), Seneca Crane in The Hunger Games (2012), and Doyle in Interstellar (2014). He was one of four subjects in the documentary My Big Break (2009), which covered his fame after American Beauty and struggles with substance abuse. Rebuilding his career, he starred in the premiere of Venus in Fur by David Ives in the off-Broadway production in 2010.

He began appearing in the FX anthology series American Horror Story in 2014, playing Edward Mordrake in Freak Show. In 2015, he starred as Detective John Lowe in Hotel, for which he received a Critics' Choice Television Award nomination. The following year, he played Ambrose White in the series' sixth cycle, subtitled Roanoke.