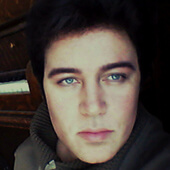 Tony London grew up on the rough streets just outside the city, during the late 1970s and 80s. Blue collar combined with inner city life, made the idea of any local kids thinking they could become a star, a mere pipe dream. He began singing in travel Broadway shows like 42nd Street and South Pacific at age 16. From there, he joined the military and sang for the Air Force Band, and immediately following his discharge, was picked up by a National touring show band. Tony spent the first decade of his singing and acting career, bouncing from one performing show band to the next, always seeking bigger challenges and stepping up to higher levels of shows, and playing small roles in early cable television comedy short films.

He began recording his first pro sessions at age 19, and has since recorded and produced a total of 9 Nationally released albums, along with dozens of additional studio sessions and a list of commercially released advertising jingles. Among his many recorded albums, is "Tony London ~ Songs From The Heart" with the legendary Page Cavanaugh Trio. Produced by famed MGM actress, Marsha Hunt, the album included hands-on co-direction by famous writer-composer, Hugh Martin, who worked for years with stars like Judy Garland, writing songs such as "Have Yourself A merry Little Christmas" and "The Trolley Song". Another famous writer-composer who got involved on the album was Ray Evans, known for his timeless hits "Mona Lisa", "Silver Bells", Que Sera Sera", and theme songs for well-known shows like Bonanza and Mr. Ed.

Although Tony spent years composing a variety of music styles and behind a microphone in the recording studio for several ad agencies, jingle houses, and for album projects, he finally turned his talents of writing to screenplay format. Heavily influenced by the mystique of fictional story-telling, he spins tales that are a new brand of uniquely original and compelling.