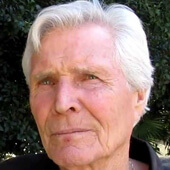 From a very early age Gene Warren, Jr. proved to be a precocious daredevil athlete with ambitions to be a stunt man or a world-class diver. He played football, was an avid swimmer, tumbler, and champion 3-meter board diver, and taught himself scuba. At LA High School he also took interest in theater as a member of the stage crew -- building and painting sets, becoming an Electrician, Lighting Director, and Stage Manager.

Inspired by the stunts in popular Westerns ans Swashbucklers in the movies of 50's, it was not unusual for teen-aged Gene to be found dangling from chandeliers at large downtown theaters, or climbing up telephone poles in order to dive into nearby swimming pools. When he was very small, his mother would read all kinds of fairy tales and magical stories, and he would ask, "Where are these fantastic worlds?" Now Gene creates these amazing creatures and places for a living. His earliest jobs in Hollywood included Dolly Grip on THE MONKEES television series at Columbia Pictures, and animating Dopey for LAND OF THE LOST at his father Gene Warren, Sr's. studios (Academy Award-winner for FX on THE TIME MACHINE).

After opening Fantasy II Film Effects in 19080 to continue his father's innovative stop-motion and special effects work, he added optical printing to their services so they could composite their sequences seamlessly. In 1983 along with his partner Leslie Huntley, he won the Primetime Emmy Award for his highly realistic effects work on the acclaimed television mini-series, WINDS OF WAR. In 1992 he won the Academy Award, BAFTA Award, and Saturn Award for Outstanding Visual Effects for his cutting edge, riveting sequences in james Cameron's TERMINATOR 2: JUDGMENT DAY.

Recently Gene has written and optioned several screenplays, and done Visual Effects Supervising or Consulting on features such as THE ABYSS, DRACULA, TRUE LIES, THE MOTHMAN PROPHECIES, PUNISHER, Y2K, MEN OF HONOR, 6TH DAY, HELLBOY, all three UNDERWORLD movies, OUTLANDER, and THE EXPENDABLES (nominated with Chris and Gene III for a 2011 Visual Effects Award). He continues the family legacy of superlative effects work with his two talented sons Gene Warren, III - the Production Designer, and Christopher Lee Warren - the Cinematographer.