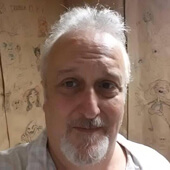 President of the multi-faceted Art, Prop, and Film Company, Frame of Mind Pictures, since 1987, Tommy is an artist who grew up in the foresty suburbs of New Haven, Connecticut. With early influences like The Beatles and Peter Max fueling his imagination, Tommy's creative output rapidly became sophisticated, as he began playing piano and producing animated films at the tender age of 9. After experimenting with film special effects, pixilation, and stop motion animation throughout high school, Tommy was accepted to the University of Southern California, as the only freshman in the Film Animation program at the School of Cinema. Tommy produced his first film at USC, a 3-minute 16mm animated film, Clownster (1979), by painting over 1500 cels, and was invited to screen his work at Bill Melendez studios, where they produced all of the Peanuts cartoons.

After graduating from USC with several awards including the prestigious Glen Lukens Award for Outstanding Studio Artist, and enduring four years of tireless training at the Motion Picture Screen Cartoonist's Guild at night, Tommy was hired as an apprentice animator at Hanna Barbera for Yogi Bear's All-Star Comedy Christmas Caper (1983) and soon after at Walt Disney Studios for Mickey's Christmas Carol (1983). In the mid-1980s, the animation boom had not yet begun (this era started in 1989 with the release of Walt Disney's The Little Mermaid), so Tommy took a job in the prop department at Paramount Studios in Hollywood, where he created a variety of props for popular television shows like Cagney & Lacey (1986) and Dynasty (1986).

Tommy returned to New Haven in 1987, and started his own business, Frame of Mind Pictures, inside an 800 square-foot studio once occupied by toy legend, A.C. Gilbert, who designed the original Lionel Trains and Erector Sets back in the 1950s. Inevitably, the historical factory complex was sold, so Tommy moved his art business back out west to Glendale, California in 1991.

Before long, Tommy's wide variety of art services and his friendly professionalism became well-known, and he began signing independent contracts with the world's top entertainment corporations like ABC, Walt Disney Company, Dreamworks, and 20th Century Fox. As a featured prop artist on the blockbuster films Independence Day (1996), That Thing You Do! (1996), and most recently, Danny Collins (2015), and on the hit TV shows Glee (2011) and Criminal Minds (2012), Tommy has earned the confidence of major production companies, and has evolved into one of the most sought after artists at the core of the entertainment industry.

Tommy recently came full circle with his passion for film making by writing the feature length comedy/mystery screenplay, A City of Shoulders and Noses (2016), as well as co-writing three other screenplays, the urban drama, Crooked Halos (2016), Sons of the Father, and the suspense thriller, The Ten Bells (2017).