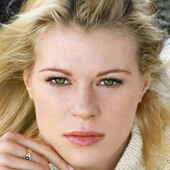 A native of Siberia, Russia, ELENA BLESKINA, MBA, Institute of International Law and Management from the University of Economics and Management. Upon completion of her MBA, Miss Bleskina moved to Los Angeles California to continue her studies towards her Doctor of Jurisprudence [JD].

However, soon after her arrival she was introduce to a production company, working on a very famous Russian Novel, "The Master and Margarita", for Feature Film Production. Miss Bleskina joined the company, began her journey into film making. As CEO of Magwill Entertainment she was head of development and Acquisition. Miss Bleskina was in charge of Feature Film/Theatrical Release, Acquisition, Distribution in Russia and CIS and the DVD market.

Presently Miss Bleskina is a full time Producer/Partner for another Russian Classic, "A Hero of Our Time", and an original story "Summertime on Gull Lake", along with three other projects in development. She is in constant contact with production companies around the world, as well as developing relationships with various financial institutions, including media funds, support groups, government funds, private equity, TV & Studio support, local and International Banking consortiums. Her principle focus is on co production and foreign distribution.

Known For: Johannes | Boudica | Summertime on Gull Lake | A Hero of Our Time